The Upshot on Today’s Polls – Analysis of the day in polls, from now until Election Day 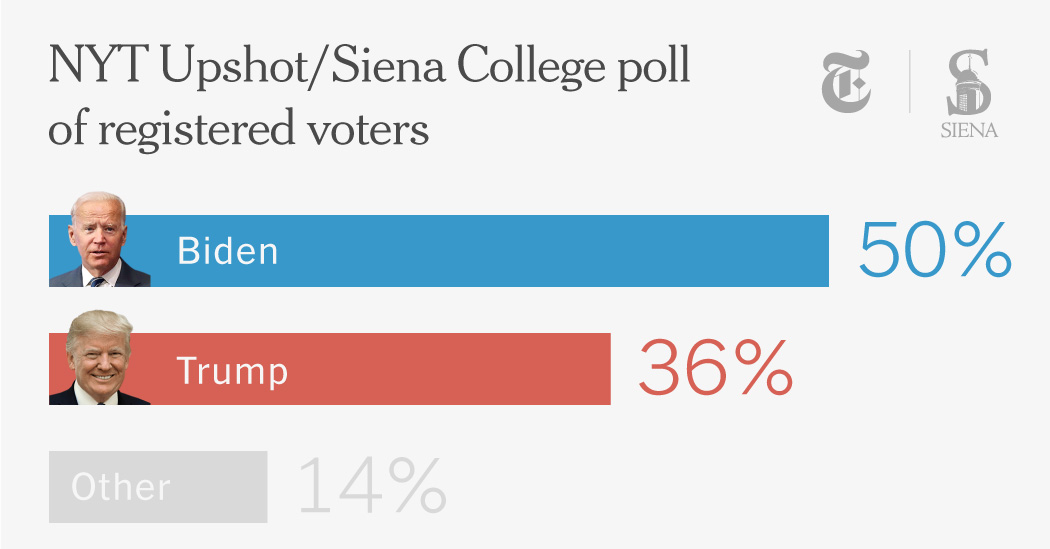 Trump’s best day of polling since the debate.

President Trump has had a terrible few weeks of polls. On Tuesday, he probably had his best day of polling since the first presidential debate in late September.

Trump’s not-so-bad day. The president might not have led in any poll today, but almost every survey was better than the polling average for him. Three stand out: the ABC/Post poll showing Joe Biden up in North Carolina by one or two points, depending on the inclusion of minor-party candidates; the UNF poll, which showed Mr. Biden up by just a point in Florida; and The New York Times/Siena poll, which showed Mr. Biden up by nine points nationwide.

None of these results are good for the president. But they are all better for him than the average, and they came from high-quality, live-interview telephone polls. In general, these types of surveys have been Mr. Biden’s best. In fact, the Times/Siena poll is the first national live-interview survey to show a single-digit race since the first debate.

‘Best’ is relative. My best game as a quarterback in middle school football was getting shut out, 7-0. True story, and I was pretty proud of it. Here again, Trump fans have something to be pleased about, but they didn’t put any points on the board. He didn’t lead in any battleground or national survey conducted today.

And while most of the results were better than average for the president, there were still plenty that were flat-out poor, like trailing by three points in North Carolina, per Ipsos, or trailing in a Rasmussen poll of Ohio. He was even tied in a Republican poll of Iowa.

Is it a real change? You can go nuts trying to answer this question based on one day of polling, but I would note that there haven’t been many of those eye-popping big leads for Mr. Biden lately. And some recent results have seemed pretty underwhelming for Mr. Biden compared with the average, like the CBS/YouGov polls of Wisconsin and Arizona on Sunday. As a result, our poll averages have started to move a bit back toward Mr. Trump. They haven’t moved much; they’ll need to see more data before they’re convinced the race has tightened by a point or two.

If the race does move a point or two back toward the president, I don’t think we’d be short of an explanation. It’s a natural moment for some of the president’s more reluctant supporters to finally get back on board. The brutal run of bad news for Mr. Trump at the start of the month — the debate, a positive test for the coronavirus — has seemed to come to an end. Over the last week, the news was arguably favorable to him. The hearings for his Supreme Court nominee, Amy Coney Barrett, put her on course to a confirmation, with majority public support. The New York Post story about Hunter Biden, although questioned within the paper’s own newsroom, has seemed to energize Mr. Trump’s base. Together, it might be just enough to reset the environment and allow some truly hesitant Trump supporters to return to his side, where they were before the debate. There’s a long history of voters returning to their preferred party as the election nears.

State of the race: It’s still Mr. Biden’s to lose.