U.S. stock futures had nudged higher during the debate but then retreated as Trump cast doubt on whether he would accept the election’s outcome if he lost.

Asian trading had been choppy rather than outright weak but Europe sank 0.5% early on amid worries too over the steep rises in coronavirus infections across the region again.

“The debate just added to the confusion about how the election will run,” said SEB investment management’s global head of asset allocation Hans Peterson. “But financially it doesn’t change anything”.

The U.S. dollar crept higher and is set for its best monthly gain since July 2019, while the yen rose 0.2% to 105.50 per dollar, its strongest daily rise in nearly two weeks.

Markets globally, most of which are headed for their first monthly retreats since March’s meltdown, either deepened losses or pulled back from highs scaled after data showed China’s economic recovery remains on track.

MSCI’s broadest index of world shares which tracks nearly 50 countries dropped 0.2% for a 4% September loss. Oil is down just over 10% this month while gold’s 4.1% drop will make it its worst month since late 2016.

Chinese property developers gained, led by a 15% jump in Evergrande shares after the heavily-indebted giant reached a deal to ease cash crunch concerns.

The official manufacturing Purchasing Manager’s Index (PMI) rose to 51.5 in September from 51.0 in August. Analysts had expected it to pick up slightly to 51.2. 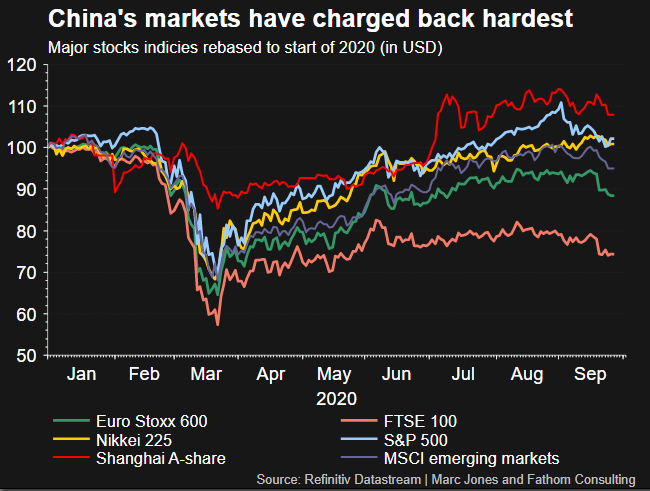 The presidential debate yielded no clear winner and barely moved the needle in betting markets, which project a narrow Biden victory. Odds maker Smarkets slightly lowered Trump’s chance of re-election to 40% after the debate from 42% beforehand.

But as the election draws closer, investors are increasingly expecting a bumpy final lap and are bracing for the possibility that the result is unclear on polling day.

Options trade points to a volatile November. Two-month dollar/yen volatility, a gauge of expected moves in the yen, is elevated, and its premium over one-month volatility is near record levels.

On Wednesday, major currencies eased against the dollar after the debate, The euro dipped from a one-week high to $1.1736 and the risk-sensitive Australian dollar fell 0.2% to $0.7118, heading for its worst month since March.

Biden said in the closing stages of the debate he would accept defeat if he lost at the ballot box and would not claim victory prematurely.

Trump, who has refused to commit to a peaceful transfer of power if he loses the election, repeated unfounded allegations that mail-in voting would lead to fraud.

“I don’t think we were expecting anything else from Trump,” said Chris Weston, head of research at Melbourne brokerage Pepperstone. “He continues to put that contested (result) risk premium back into the market.” 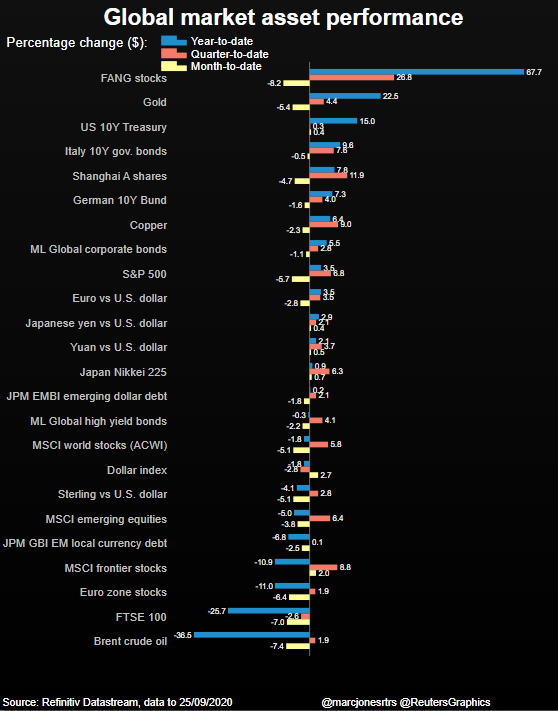