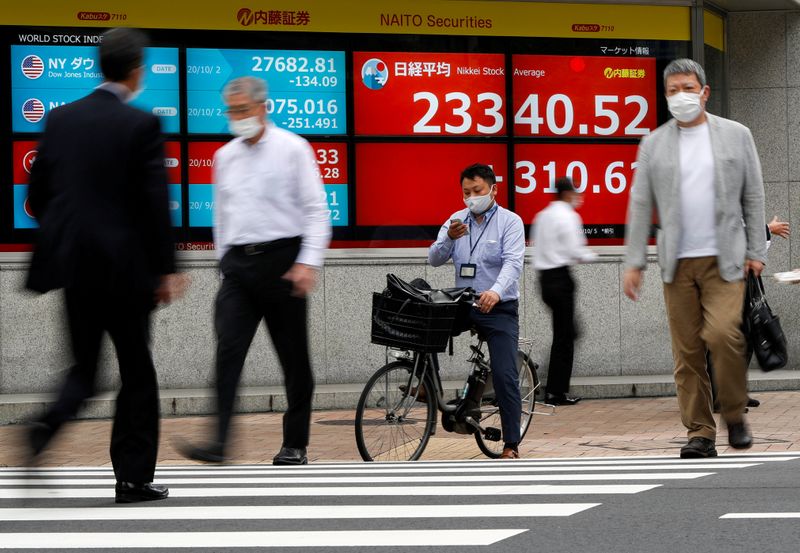 NEW YORK (Reuters) – The euro climbed on Thursday as the European Central Bank disappointed some investors hoping for a bigger stimulus boost, while world equity indexes were near flat in choppy trading amid uncertainty over fresh U.S. economic stimulus.

The ECB increased the overall size of its PEPP stimulus program by 500 billion euros ($605.7 bln) to 1.85 trillion euros ($2.2 trillion), in line with market expectations. It also extended the program by 9 months to March 2022, with the aim of keeping government and corporate borrowing costs at record lows.

The ECB also said it is monitoring the euro’s exchange rate with regard to its possible implications for the medium-term inflation outlook.

Sterling weakened as investors became more cautious about the risk of a no-deal Brexit.

On Wall Street, the S&P 500 was little changed, with focus on U.S. stimulus negotiations as an increase in weekly U.S. jobless claims pointed to a stalling labor market recovery.

“Any good news on the stimulus could usurp everything else and get us back to focusing on the potential for vaccines and the economic energy that will get released,” said Art Hogan, chief market strategist at National Securities in New York. “But for now, we are held hostage to the gridlock in Washington.”

U.S. lawmakers approved a stopgap government funding bill on Wednesday that would provide more time for negotiations. But an agreement has remained elusive due to disagreements over aid to state and local governments and business liability protections.

Earlier, S&P Dow Jones Indices said it would remove 10 Chinese companies from its equities indices and several others from its bond indices overnight.

In the bond market, longer-dated Treasury yields were broadly lower.

Oil futures were higher, with Brent rising above $50 for the first time since March. Spot gold prices were slightly lower.